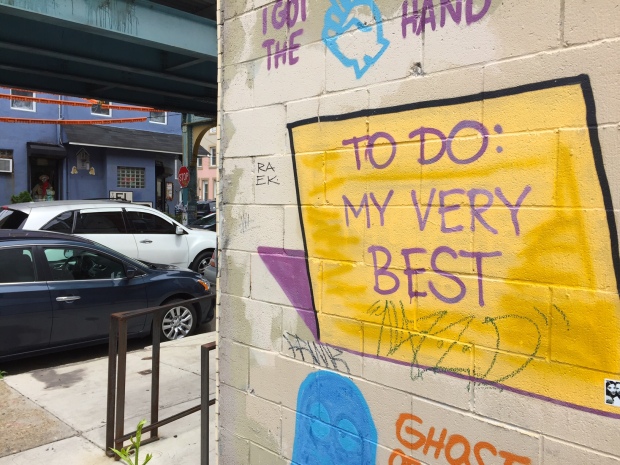 Someday I’ll smile every time
I bump into myself.
Even when that self is a mess,
an ooze, tears and unwashed hair
undone tasks
and hiccups
and wrinkles
and regrets that smell like
Marlboro Lights and malt liquor
And I’ll smile even when that self has
a pulsing nose zit and writes terrible poems
— I mean, why not? —
might as well plan for the worst-case.

That someday is
seemingly so near and
sometimes so far

Someday I’ll love even your inconvenient needs
the ones that turn green and churn when interstate
turns to twisty backroads, dark night
father lost
you have to pee
not yet Mama says
in a little while
Mama says

Someday I’ll love you — you used to be called something else,
remember? Lainey the baby who couldn’t wait
Lainey peeing on the side of the road,
Mama blocking
passing headlamps,
hot urine a glowing stream
the one who can’t wait
the one needing
something embarrassing
needing

Someday Lainey will reappear
dressed for Halloween in the body of a middle-aged woman
(someday she’ll have to grow up, won’t she?)
— even though oh, she needs
still, even now, she needs and needs — damn it

And someday
at the very next exit or 268 miles ahead —
some sweet day that will maybe smell just like the bread my mother
took to baking when she was widowed, just for herself,
just because she wanted to

That someday
I will rise up, a miracle, like the punched-down dough
swelling up in a bowl in an avocado-green long-lost kitchen
I will be full, I will be home

That someday
I will look at myself and melt
melt like butter on
chewy warm grainy bread, fresh from the oven

I will love every last crumb of myself.

Notes: I’ve been thinking about self-love a lot, how hard it is. How essential and impossible in moments (which is why we need our friends).

I really am drawn to Ocean Vuong’s amazing work.
My piece (not really a poem yet, maybe someday?) is from a fast-write from a prompt based on Ocean Vuong’s “Someday I’ll Love Ocean Vuong” — a poem he notes is “after Frank O’Hara and after Roger Reeves”… which made me curious and google revealed Roger Reeves’ intro to his poem:
We can’t stay in poetry world forever. It’s a poem that I kind of wrote to myself. It’s a love poem, again. I read this poem for my MFA compatriots struggling in the muck of all types of criticism and self-doubt. It doesn’t stop. It will keep going. No, actually I was struggling in my MFA a lot. I don’t know if you guys are the type of poets that are trying to write poems that last beyond your life, which is what I’m always trying to do. I’m always trying to make something that can outlast me, because why else would we make something? Frank O’Hara is a guy I always turn to. He had this one line in his poem — I can’t find the poem again because you know Frank O’Hara has a lot of poems — and it’s a poem where he says “someday I’ll love Frank O’Hara.” I thought, that is the best thing to say in the middle of a poem — someday you’ll love yourself. So I said, I’m going to title a poem “Someday I’ll love Roger Reeves.”

Try it yourself — read Vuong’s poem and then take a deep slow breath and write for 10 minutes beginning with “Someday I’ll love (your name here)” …see what happens.

Posted by Elaine Olund in Uncategorized on June 19, 2017 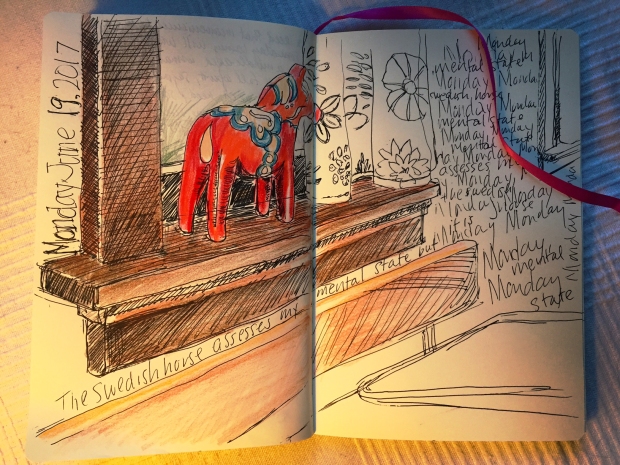 No words, just a picture.

the Swedish horse with the broken leg assesses my mental state
the coffee cup outlines the circle of its base onto the table
my sandals inscribe lines on my feet, a loose sundress erases my figure

the gel pen observes the work like a skinny foreman,
rigid, impatient at the pace
dear old patient threadbare linen napkin blots up the drips of minty water

————
Notes: this is from a Natalie Goldberg prompt in her wonderful book, Writing Down the Bones;
1. write 10 nouns as a list. (I wrote ten things I could see/hear in the room)
2. write ten active verbs (she suggests thinking of verb relating to an occupation; I used “artist” as the verb-source)—sketches, inscribes, erases, observes, blots, outlines, paints, plays, swishes, deckles…
3. combine the nouns with the verbs and see what emerges
Have fun, see what happens. Why not? 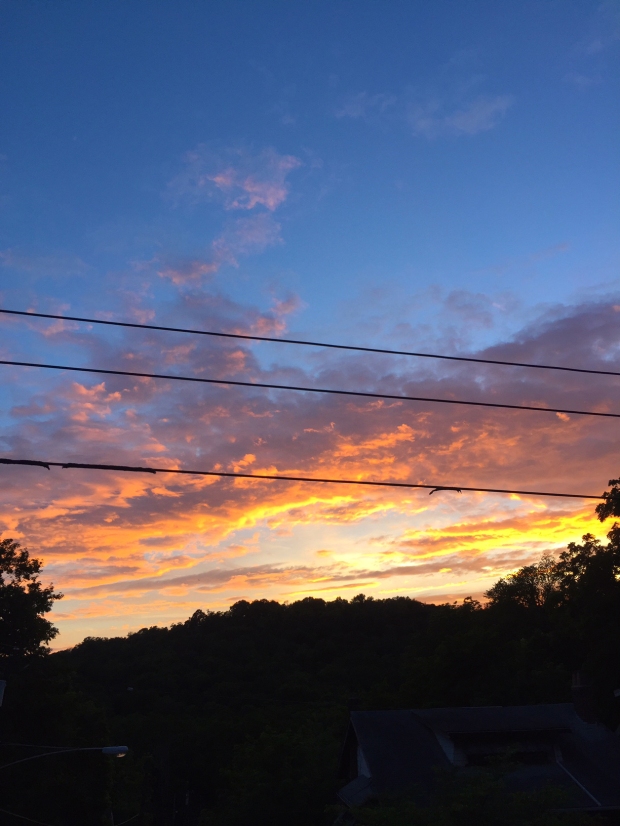 It’s high time. I have to have a talk with my Self.

I jump right in. It’s going to be awkward, what I have to say. And Self can be very—fragile and defensive. No sense in beating around the bush.

“Self,” I begin (because it’s always good to call people by name, to personalize it, right?) “You are so not perfect. Face it: you’re just human. You make lots of mistakes. You can’t do it all. You will never be perfect,” I repeat the not-perfect part for emphasis, to be sure she’s getting it. “Just relax, Self. Good enough is good enough.”

Self answers, in her most icy annoyed tone: “I never SAID I was trying to be perfect!”

“Then why,” I ask. “Why are you so impossibly hard on yourself when you fall short? When you say the wrong thing, for instance. When you can’t get it all done. Or when your writing isn’t quite—on the mark?”

Self thinks hard.
Self remembers something a friend showed her the other day.
Underlined in a book she doesn’t even know the title of (can you believe she can’t remember?) she read the words of some learned wise person who said that perfectionism is a form of egoism. That it springs from thinking you’re so good you have to do better, be better, be—perfect. And that it’s actually quite generous and healthy and more productive in the end to allow yourself to be imperfect. To treat yourself kindly, to encourage your Self.

Self thinks of the last few days, where she felt so inadequate in her Self and also so damn worried about the state of the world. As if she were falling short by not fixing the world. As if she could somehow do more than her best and miraculously end hate and prejudice and also finish her novel, and meet some deadlines all in one week. She has a choice here: get mad at her Self —or relax.

“Let’s go for a walk,” Self suggests. And as usually happens when my Self and I relax into what is, instead of what we fear, we find joy again and the world suddenly reveals its lopsided and absolutely imperfectly perfect beauty. Everything glows brighter.

Good enough is good enough.
And the sunsets in June are the best.