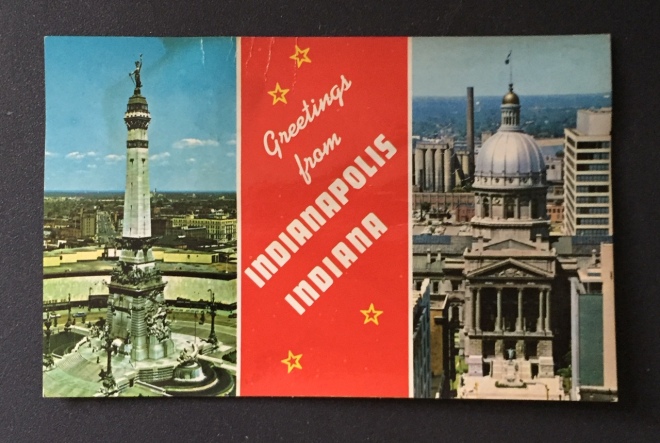 You were SO excited, do you remember? I mean, you were on the move and it wasn’t New York, or even Chicago—but it was somewhere—another state, albeit in the absolute wrong direction, away from the coast, even further from the Atlantic you dreamed of living near one fine day.

I’m writing to remind you of the sheer newness, the joy of that. Do you remember? Learning a new city, by getting lost in its flat expanses, gridded broad streets radiating out from a center point, the grand procession of green-lawned parks marching up Meridian Avenue, dotted with statues, obelisks, monuments of wars long past…one-way streets and diagonals and even a traffic circle!

Remember cruising the city in Georgia McGuire’s shiny red Mercedes Benz—parking with flashers on in truck zones or in alleys to run contact sheets into Ad agencies and design studios? You pretended the car was yours, and Billy Joel’s “Uptown Girl” played in the sound track in your bubbly young mind.

Back then, it seemed money and a fancy foreign car might add up to happiness, or something like it.

At the end of the work day it was back to your old wood-grained Chrysler wagon, drinking 3-for-$1 beers with Jane and her friend—was it Amy? Angie?—who were in their late twenties, and regulars, so no one carded you even though you looked about fourteen, so fresh-faced, even with makeup on.

There was an air of possibility surrounding you like a bubble that humid Indianapolis summer. Even though nothing really happened—well, there was that brief crush on Georgia’s handsome young son (whose name has vanished now into the summer haze). He was tall and dark-haired and had a sweet slow Alabama drawl and the careless manners of someone born with money. The tobacco-chewing habit—the way he spit the chaw into a coke bottle like that was normal—was a crush-breaker. But still. For a few heart-thumping flirtatious days, you’d dipped into fantasy the way he dipped into Skoal. Imagined being part of the family, rich, unconcerned about the price of a Mercedes or a mansion. Because back then, happiness seemed like something you could maybe buy, if you were lucky. Something you could purchase and keep, like a trinket from some far-off hotel gift shop. Something just out of reach for a girl like you.

If I could really send you a postcard now, I’d tell you to sit and feel the pain of what you were running from, because happiness was folded underneath all along. You just needed to take your foot off that accelerator. Slow down. Unpack.

Love from your future self,

Note: this was written from a prompt where each person chose (at random) a postcard, and wrote a “postcard” to an earlier version of themselves; we wrote for 10 minutes, and the above is a quick polishing of the fastwrite back to the past.

2 thoughts on “Postcard to myself”