Poem-sword in one hand, packing tape in the other, recycling bin in my third hand and tissues in my fourth.

(For the dust. It makes me sneeze.)

My fifth hand is clutching a steaming mug and my sixth hand is wasting time on Facebook. My seventh and eighth hands are clasped in some kind of prayer, for forgiveness and strength, and all my other hands are clapping a rhythm to keep the rest of us on task. (Futile).

Later, the right hand will order pizza while the left opens a beer and the others will rest, their weary knuckles lined up still as the stones and shells collected along faraway hills and shores, the useless stones and shells that I tell myself I do not need in this next life.

Stones and shells held in younger palms once, stones and shells cold now, but once warm with the energy of discovery. Every stone, every shell: the most beautiful, the smoothest, the whitest, the thin-as-a-dime, translucent ones, the one black as the cold Pacific on a moonless night, the round one full of holes and light as a bite of sponge cake, the tiny snail shell spiraling the way my heart does, these last days in this home where I spent more years than any other.

(One of my sleeping hands wakes, shakes a finger at me, silently chastising me for being so impossibly sentimental. I tap it with my Ikea hammer—not even that hard, just a little tap—and then feel badly as it recoils in pain. Makes me think of the witch’s foot when the house falls on her in the Wizard of Oz.)

Back on task. My extra hands snap softly, whisper-snapping a nice quiet beat, ceremonial sort of, as I plunge my two hands into the bowl of stones and shells.

It’s a big heavy bowl, overflowing with memories—the brightest, the shiniest, the darkest, the ones dyed ugly purple-pink with my own shame. A few marbles are mixed in: a topaz one, cat’s eye, like the cat who doesn’t live here anymore. There’s a pointy triangular piece of sharp-edged sea glass and an orange gem from a Mancala game, shiny as little girls’ laughter. I have to stop. It’s time. They are only stones and shells.

Such a rattle in my heart, settling and unsettling, as I move on at last. 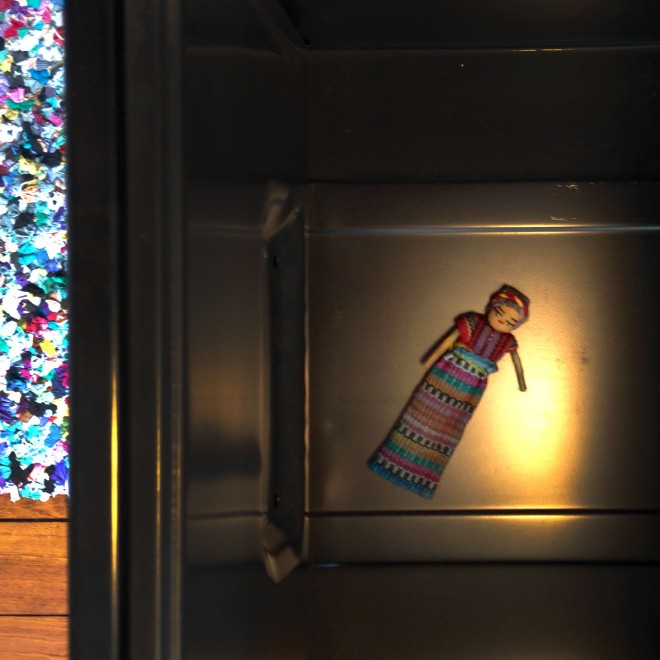 This is the first blog post I’ve written straight into the chute without a little polishing. I’m frazzled. I’m moving. I’m selling a house I lived in for almost 2 decades, a house I had a wonderful family life in.

I’ve been packing up and purging and sorting for months now. And now it’s almost show time. A few weeks ago at Rohs Street, I wrote a fast write about finding dolls in drawers, because that is a thing that keeps happening.

But because I’m moving and packing and purging, I have no idea where that fast write is. I think there was a good line or two in there, about opening drawers and feeling eyes upon me. Eyes of the past, unblinking, watching me forge ahead into the future.

It’s hard enough to put all those precious crayoned drawings and lovingly made paintings into the recycling bin (but I did it. Okay: I saved a few. A few hundred…). But the dolls: the dolls are watching me. The dolls make me remember the sound of laughter drifting in from A’s room, where she and her sister and a couple friends were lining up the dolls into a parade. The dolls make me wish I could somehow package up a few boxes of the past to dive into whenever I feel lonely for my girls.

The past is always with me, in me, part of me. Still, the dolls seem reproachful. Doesn’t she look a little pissed off to you?

I guess change is always hard. The doll and I will both be okay. We won’t be alone, either. She’s coming with me.