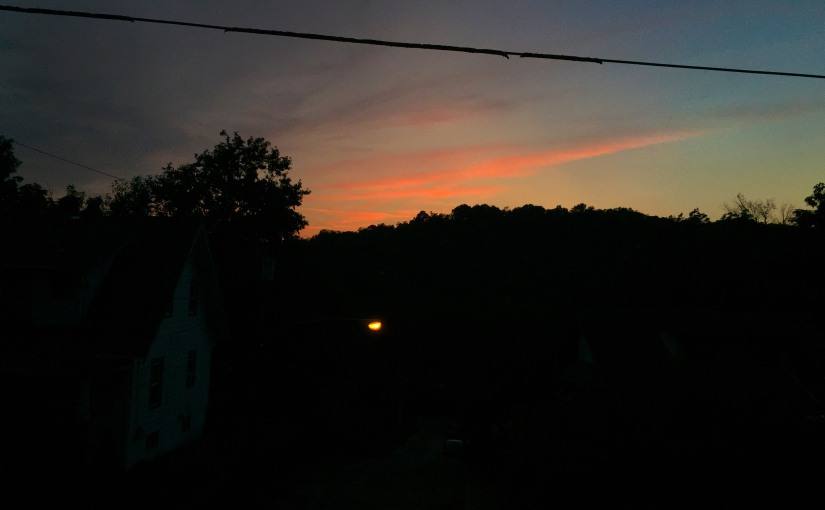 I took my car to the dealership this afternoon. I brought my work along, dreading having to tune out the flash and blare of the ginormous big-screen TV in the “customer lounge.”

Ironically, the last time I was at the dealer, trying to ignore the television, it was Inauguration day. Me, a woman who hasn’t lived in a house with a TV for years now, who would have sooner walked barefoot across a bed of broken glass than watch a man she had zero respect or faith in rise to power — yes, I accidentally ended up seeing the live streaming coverage of Trump being sworn in. It was inescapable in the “lounge.” I gave up trying to work, because they had it cranked up. The office staff was watching, a few mechanics wandered in and out, catching a peek.

I listened to the others, the customers and car salesmen, many of whom probably voted for Trump, making comments about how pretty Melania looked in that ice-blue, how nice it would be to have her in the White House (seriously, someone said that, that she would look so pretty at those state dinners). Oh, how handsome and cute fidgety young Barron was. Switch to a close up of Trump, hand on Bible.

“Look how serious he looks,” marveled a white lady about my age. She sounded relieved, and mildly surprised. Her tone said what I think everyone there hoped: that the campaign was over, and now he would behave like an adult. The pussy-grabbing tapes could safely be shoved into the crypt of collective memory, along with all the things he’d said on the campaign trail. Calling Mexicans “rapists,” hollering for the crowd to “knock the crap out of them! I’ll pay the legal bills!” — well, all politicians say crazy things in the heat of a battle. Don’t they? It’s like a man killing his wife in a fit of jealousy. Sort of, well, excusable, right? I mean, don’t we excuse that? It’s all just locker room talk, to be tuned out, glossed over.

“Wow. It’s gotta be a hard day for them,” said a round-faced woman, as the camera panned to a close up of the Obamas. She sounded like she was commenting on a reality show where a couple’s just been voted off the island. She sounded both sad and gleeful at once. Like, I mean, this is exciting! We wanted change! And look — the camera pans back to Melania’s sculpted cheekbones. “You know she was a model, right? She still looks so amazing. How old is she?”

An older black couple stood up right then, and moved as far away as they could get from the “U” of couches set up in front of the giant screen. The overall vibe in the lounge that day felt more tense than celebratory, even though, as I said, I’m willing to bet many of those present had voted for him, and most of them made comments along the lines of, “I bet he’ll get really smart people in to run things. You know, he’s an excellent business man.”

It was a surreal experience.

I do think most people, liberals like me included, hoped he’d delegate responsibly and treat the job seriously. That he’d want to do right, in the end. End his association with openly racist “platform of the alt-right Breitbart” Steve Bannon. Stop the twitter rants. I mean, he’d be President! He’d have to be a responsible, sober adult. But that was 207 days ago.

Today at the dealership, the big screen was dark and silent, and I really didn’t think about why until I came home and watched a recording of Trump’s press conference online.

I wonder what the history books will say someday? I wonder who will write them? I wish I could write more coherently about what is happening right now, in real-time, but it all feels too much.

So instead, I took a walk. I took this picture. A bright sunset fading into darkness. A lone streetlamp shining. We have to watch, but not fade into darkness.

All of us who care about our country and everyone in it, we have to watch, and not fade.

Somehow, we have to be the light.

One thought on “somehow, we have to be the light.”