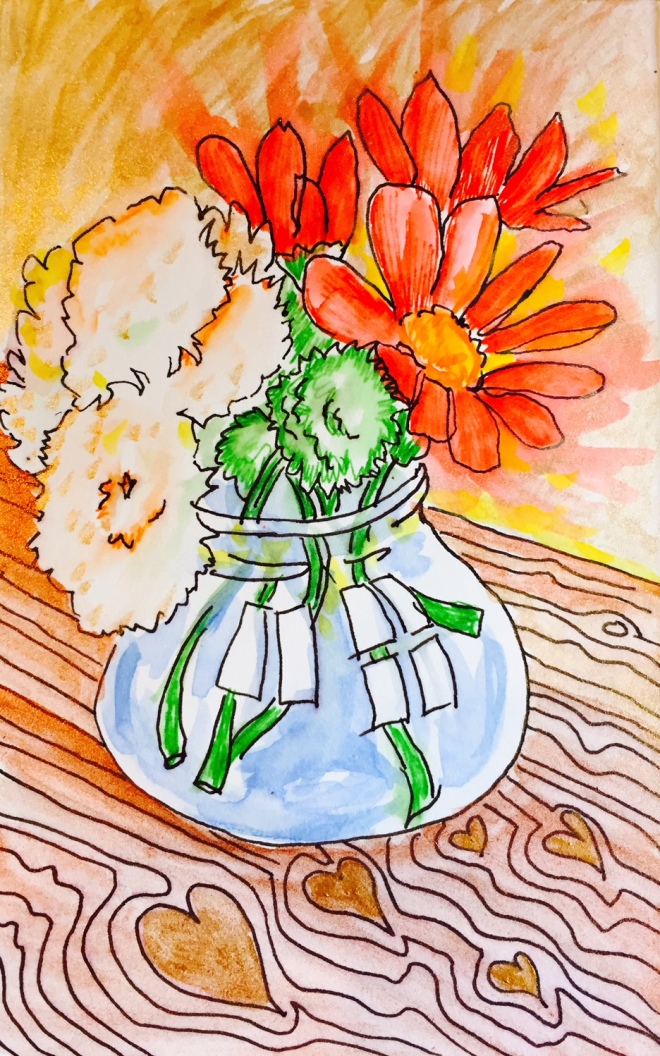 Waiting for the sunshine

You stood in the kitchen, waiting for the sunshine.

Oh, Mama. You waited.
You waited while the tickle in your throat rattled and rattled. Every phone call, eruptions of coughing. I listened, there was nothing else I could do—and sometimes I’d cut in, “hey, I’ll call you back, how about, when you’re feeling better.”

Now I see it through a backwards lens, time is funny like that, now I’m about how old YOU were then and my daughters are the ages I was then; I was your little last bird flown. Now I know the feeling of that emptiness, that new empty-nest, and how precious those calls become. Now I can feel, all these years later, how alone you must have sometimes felt, in your small kitchen, especially that last winter, coughing, insisting, talking, waiting, insisting that you were just fine.

You couldn’t really talk, but you didn’t want to hang up. It was a tickle, the end of a long lingering cold, a cold-on-top-of-a-cold, it was nothing.

Now I see you, frozen in the amber of that long-ago cold alone kitchen. Me not so far away in miles, but twenty-something me. So busy, busy, busy. A budding Bokonist, junior capitalist, believing that being an adult meant staying on the spinning hamster wheel. And also believing that you were going to be around for years and years, Mama. You were my mother. Life without you wasn’t comprehensible, and I didn’t imagine it, wouldn’t even try.

So I believed you, about the cough being nothing.

And still you coughed. I began to notice the unendingness of it. Worry crept in. I insisted you go to the doctor, but not soon enough. You locked my worries out and I let you. I locked them up, I guess. They were scary. Where did I learn to lock up so well? From you, Mama, you who waited in your small kitchen, vinyl-tiled, traces of avocado green barely visible in the corner, a little spot you missed when you carefully painted over with eggshell cream.

The wall phone is still avocado green in the mists of my memory. The round orb of the pendulum lamp casts a golden glow over the Formica table of the past, littered with bridge hands and newspapers and you, sitting there, smiling. So warm. I wish I could climb back into that kitchen, climb back to you.

I went to a movie with a friend the other day, an art film. Over ice cream afterwards he asked me, wonderingly, did I think the movie meant that all a man really wanted was a mother? I looked into his slate-gray eyes, and I thought of you, Mama.

No, I thought. It’s not just men who want that.

I thought of that horrible Psychology textbook photo, of the poor little monkey in the experiment who could choose, while starving, between a wire-framed “mother” equipped with milk and a nipple, or a fur-covered “mother” to cling to.

My friend’s sad eyes after the movie made me slide backwards through all the years. His eyes made me want to find you again, find you and fold you in my arms, to mother you, Mama. Because that is what you must’ve most wanted.

Because sometimes, life is scary, and you just want your mother.

But life is a funny circle, too. Scary and funny. In seeing how I failed you, I found you once again.

You’re here, waiting in the sunshine. Sometimes the darkness covers your shine, like a cloud. But you’re always there.

(Fastwrite from a prompt on regret).

3 thoughts on “waiting for the sunshine”